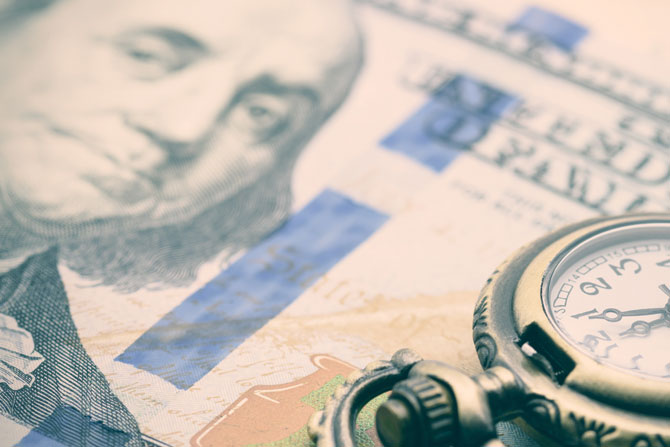 With LIBOR’s impending cessation, the search for alternative benchmark rates is in full swing. Most banks are weighing the benefits of one or more replacement benchmark rates. However, there are economical and operational trade-offs with each choice. This article explains the current contenders to replace LIBOR, comparing the pros and cons of such rate replacements. Broadly speaking, these replacement rates fall into two categories: (1) Secured Overnight Financing Rate (SOFR) based rates, and (2) Credit Sensitive Rates (CSRs), which are discussed below.

What is the Secured Overnight Finance Rate (SOFR)?

The Alternative Reference Rates Committee (ARRC) – a working group established by the Federal Reserve and the New York Fed to guide the search for and transition to a new benchmark rate for US dollar-denominated loans – has recommended that lenders transition from LIBOR to the Secured Overnight Financing Rate (SOFR). SOFR is published each day by the Federal Reserve Bank of New York and measures the actual cost of institutions borrowing cash overnight, collateralized by Treasury Securities. The New York Fed collects data on these overnight secured transactions and calculates the volume-weighted median rate charged, then published as the daily SOFR. Because Treasury Securities collateralize these transactions, SOFR is a nearly risk-free rate. Due to the volume and liquidity of the SOFR market, with over $1 trillion in transactions each day, SOFR is believed to be a stable benchmark rate that cannot be manipulated. However, because SOFR is only published as an overnight rate, any benchmark must be an average SOFR to smooth the volatility of the daily rate.

Further, the Financial Stability Oversight Council (FSOC) offered its support for SOFR over any currently contemplated Credit Sensitive Rate, especially in light of Term SOFR being offered as soon as the end of the summer. The weight of the FSOC’s support, in addition to the backing from other established institutions like the New York Fed, points to significant movement toward SOFR as LIBOR’s replacement. In addition, the spread adjustment between LIBOR and Term SOFR has now been set by ARRC (i.e., 0.11448% for one-month Term SOFR). However, the adoption of the ARRC’s proposed spread adjustment remains mixed.

What Credit Sensitive Rates are being offered?

Credit-Sensitive Rates (CSR) are the other primary type of benchmark vying to capture the market upon the cessation of LIBOR. Similar to LIBOR, CSRs are rates that are forward-looking term rates sensitive to creditworthiness. CSRs are often calculated based on primary/secondary market yields and data on instruments such as CDs, commercial paper, bank deposits and/or bank bonds. In this way, a CSR is responsive to credit conditions, market conditions, and term length in calculating the published rate used as the benchmark.

A variety of CSRs is published each day, with each one calculated from a different set of financial data and including different term-lengths in the published rates. AMERIBOR is published by the American Financial Exchange LLC (AFX) and is calculated daily as an average rate AFX users charge one another for unsecured overnight loans. As such, AMERIBOR reflects the actual credit-sensitive cost of unsecured borrowing by banks and financial institutions. BSBY is published by Bloomberg Index Services Ltd. and is calculated daily based on wholesale primary market funding transactions, such as interbank deposits and CD data and commercial paper rates. BSBY is published with tenors of one, three, six, and 12 months. In addition to these two primary CSRs, the Bank Yield Index and the IHS Markit Credit Rate have been proposed as other CSR benchmarks, calculated from the cost of international banks borrowing U.S. dollars and Markit’s proprietary credit data, respectively.

How do these potential alternative benchmark rates compare?

While credit-sensitive rates respond to changes in market conditions, for example, raising in times of economic stress, risk-free rates such as SOFR are less responsive to the market. They may even decrease in times of economic stress. Because a component of cost for financial institutions is tied to credit-sensitive rates, the use of SOFR as the benchmark could leave lenders with higher costs and lower SOFR-benchmarked returns in times of economic crisis. However, if Term SOFR does arrive as soon as recent developments indicate, lenders may become more comfortable with SOFR and its perceived stability, given the current market support from institutional market players. Further, the concept of Term SOFR offers lenders comfort with familiarity due to its similar nature in concept to LIBOR. The similarities and differences of each leading replacements rate are summarized in the below table.

Is the Prime Rate a viable replacement to LIBOR?

Is a Multi-Rate Environment in Our Future?

As noted above, most banks are weighing the benefits of one or more benchmark rates to replace LIBOR. At the moment, SOFR based rates are in the lead, but CSRs are in contention. ACH replacement rate choice has pros and cons, and the decision depends on economic and operational considerations, which are specific to each bank. As a result, a multi-rate lending environment seems likely in the foreseeable future. 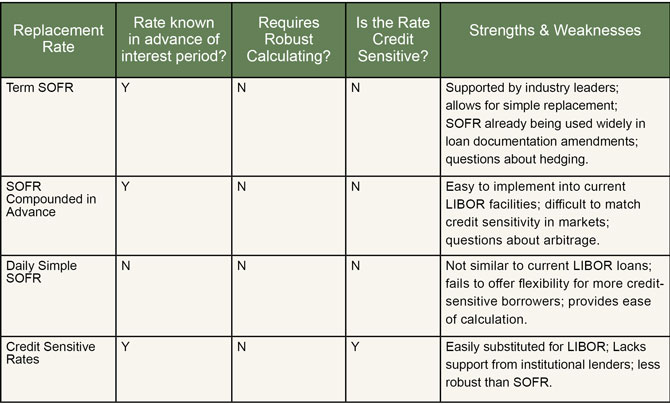 Daniel Bray is a Denver-based partner with the law firm Husch Blackwell LLP and leads the firm’s Banking & Finance group. 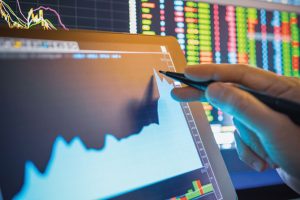 Rates Don’t Matter Much If You Have A Plan 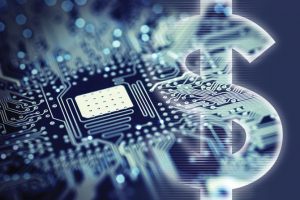